Habbo.se (formerly known as habbohotel.se) is the Swedish version of Habbo Hotel. It is one of the oldest hotels remaining and it first opened in December 2003, thus making it the 5th hotel to open. The community has never become massively popular and due to this, only a small number of staff have specifically worked for the Swedish hotel and users can only access the game at certain times.

Not many items have been released on the Swedish hotel before other sites, but a few exceptions would be the full Glass furniture range, two items from the Neon furniture line and the Pink Romantique Divider and the Pink Marquee. Which has only been released in 1 hotel (Habbo.no), spotted in 6 hotels and given as prizes in 2 hotels (Habbo.se and Habbo.sg). Habbo.se was also the test hotel for the newest version of the "/me" page (released to all hotels in February 2012).

In total, 55 badges have been created uniquely for use on Habbo.se.

In January 2015, Habbo.se announced its closure with the hotel closing on the 29th April 2015 with no merge occurring. 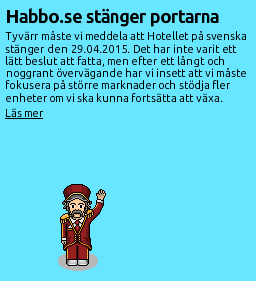 In January 2014, Habbo.se announced its closure with the hotel closing on the 29th April 2015 with no merge occurring.

The image to the side was displayed on the Hotel View from January to the time of closing, during this period all members were given builders club and HC for free.

On the 25th April (4 days before the Hotel closed), the hotel was almost empty even at peak times with the navigator only showing 26 people being in a room throughout the entire hotel. 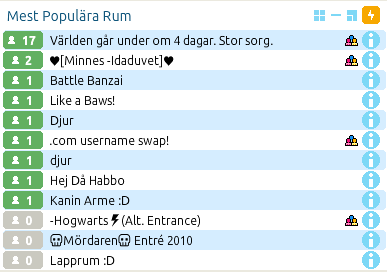 The hotel navigator 'Popular Rooms' list, right before it's closure

There Has been 45 Staff and 52 moderators, working and providing for habbo.se over the years, here's a list of them!