The Sulake Logo.
Sulake is the company that owns and runs Habbo Hotel and a variety of other services, such as BobbaBar. It was founded in 1999 by two Finnish men - Aapo Kyrölä and Sampo Karjalainen. Their mission is to make the world more playful!

The Sulake headquarters are located in Helsinki, Finland, but they also have offices in Madrid, Spain (Customer Operations and Engagement) and London, United Kingdom (Habbo Studio). They have received multiple awards for their work and products.[1]

Sulake has had many sponsors over the years, including Mountain Dew, MTV, UNICEF, Childline and LEGO. MTV was probably the most lucrative of all these due to Habbo becoming the official sponsors of the 2010 EMAs with multiple adverts screening daily across MTV in Europe! All of these sponsorship deals have helped add to Sulake's drastic increase in revenue which has risen by 8085% since 2001.

In 2011, Sulake announced that Paul LaFontaine would be taking over from Aapo Kyrölä as CEO of the company. In early 2012, there was a shake-up at Sulake, where it was reported that there was a 25% cut in workforce and the closure of all 11 country offices[2].

In October 2012, Sulake announced further staff cuts, cutting the force from 90 to 30, with employee negotiations beginning early November 2012. CEO Paul LaFontaine was announced to be leaving his role after fifteen months. Markku Ignatius replaced him as acting CEO in January 2013, before Antti-Jussi Suominen took over in April.

Following the great mute, several financial investors in Sulake pulled out meaning that Elisa increased its stake in Sulake from 24% to 85%. In February 2013, Elisa announced that it would be buying the remaining 15% shares in Sulake to become the sole investor and owner of the company.

In May 2018 Elisa sold 60% of shares to Dutch company OrangeGames who became the majority shareholder while Elisa retained 40%.

Aapo and sampo.jpg
The story of Sulake started in 1999 when Sampo and Aapo created an online application named "Mobile Disco" for their friend's band. After they witnessed the application gain a huge amount of popularity, they decided to develop the idea of multiplayer online game even further. With the help of Finnish advertising agency "Taivos" and Dee Edwards (who practically came up with the idea of Habbo Hotel which she called "Hotel Goldfish" at the time), Hotel Goldfish (known as "Hotelli Kultakala" in finish and later renamed Habbo Hotel) opened its doors in August 2000 and Sulake was officially founded.

As the community grew, Sulake decided to expand the site into two different countries in 2001 and the brand Habbo was officially created. They then went on to open a further four communites in 2003 and by the end of 2004, there were 16 hotels on 4 different continents. At this point, Sulake had over 160 employees! From 2005-2009, Habbo increased drastically in terms of size of employees, number of communities and number of user accounts. 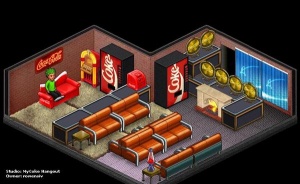 Coke studios.jpg
At this point in time, Sulake was also providing core technology for the online chat game "MyCoke" (also known as Coke Music and Coke Studios). Although Sulake never fully created the game nor were they in charge of it, they still helped play a big part in the production of the game alongside Studiocom. MyCoke was a fairly popular game and was rather similar to the likes of Habbo Hotel, but unfortunately it closed on December 6th 2007 and users were advised to join CC-Metro (Coca Cola Metro). Unfortunately, CC-Metro also closed on March 9th 2009. 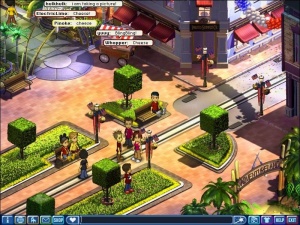 A Virtual Magic Kingdom public place
Sulake had also been creating and developing the game engine for "Disney's Virtual Magic Kingdom" (also known as VMK) in May 2005 and onwards. Yet again, they never fully owned the game but they did have a major role in design and development right up until the closure of VMK on May 21st 2008. During late 2006, Sulake also decided to perform research on virtual communities on mobile phones, thus leading to the release of "Mini Friday". It was only a small-scaled project which consisted of 5 rooms where users can talk to other members and system controlled characters. Each user created an avatar and used commands such as ":go" to move between rooms. The game was only available on S60 2nd and 3rd edition Nokia phones and it unfortunately ended on September 30th 2010. After this, Sulake decided to focus more on their other mobile virtual world, BobbaBar.

In April 2007, Sulake acquired Dynamoid Oy and thus gained ownership of Finland's most popular social networking site "IRC-Galleria". The site has over 450,000 registered users and over 6 million images uoloaded onto the site! However, in March 2011 Sulake decided to sell ownership of the website to Somia Reality Oy, a company founded by IRC-Galleria's management. 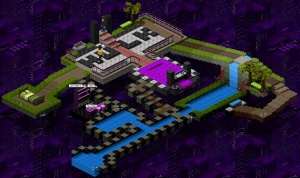 Bobbabar.jpg
In November 2009, Sulake released a free to download, virtual world on mobiles called "BobbaBar". The aim of BobbaBar is to be used as a place to meet, chat, make friends and flirt with others if you wish (hence the product being intended for people aged 17+). It has proved to be a very popular application with users due to 150,000 people signing up in under a month and with the population growing by the thousands each day. The application is named after an ex-word filter in Habbo Hotel. The application was upgraded to V2.0 on June 30th 2010, and is currently only available for iPhone, iPod Touch and Nokia smart phone owners.

In 2010, Sulake took the decision to merge all five English-speaking Habbo Hotels. Many users of the game complained and protested against this plan, but the merge still went ahead. Many feared that the merging was related to financial difficulties that Sulake were having, but Sulake never provided a full reason as to why the merge occurred. During this time, Sulake also made a large number of international staff redundant - especially moderators. The only English-speaking moderators that kept their job were those from Singapore, but many users 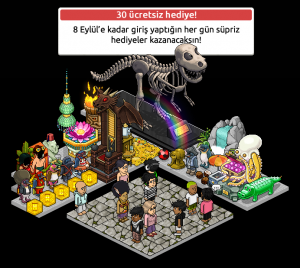 Rare Room - Habbo.com.tr
complained about this due to their limited use and understanding of English - the same applied for customer service staff.

During 2011, Sulake announced they would be releasing a mobile application called "Lost Monkey" in which users would have the chance to win virtual items and a virtual pet on Habbo Hotel. The application is available to download on the iPhone, iPod and Android devices. Sulake witnessed how popular this mobile application turned out to be, and therefore decided to develop even more. In early 2012 they announced the release of another mobile platform titled "Niko". They advertised this product inside Habbo Hotel via the use of a virtual effect and provided an incentive of furniture if users downloaded the game. This game is also available on iOS devices.

In early 2012, Sulake decided that a 25% cut in workforce and the closure of 8 offices was needed. They also decided to remove all staff from Singapore (including the moderators) and replace a large number of them with staff in Madrid. This, yet again, angered many people due to the fact that people in Madrid speak a lot less English compared to those in Singapore thus leading to even worse moderation standards.

A shock also struck many people in April 2012 due to Sulake announcing that they would be opening Habbo Hotel Turkey sometime in 2012.

In June 2012, Sulake came under fire after a Channel 4 News report revealed that Sulake were allowing users to post pornographic and violent messages on the website[3]. Their concerns that this was happening, proved as a reporter posed as an 11-year-old girl and received multiple requests for pornographic images, on a website aimed at young people and teenagers sparked concern in the global press.

As a result of the report, Sulake implemented a hotel-wide mute, which users protested by standing in Public Rooms with the torch effect.

Soon after, some furniture items were removed from the hotel and effects from others, including the Kissing Booth. The filter on Habbo chat was also tightened a lot. A full list of measures Sulake implemented are:

In the summer of 2012, multiple investors, including 3i (who held 16% of shares) and Balderton Capital, announced they were pulling out of the company. Various stockists on Habbo gift cards, including the British chain WH Smith, announced they would no longer be selling Sulake products.

The latest financial figures for Sulake are from January 2011, when they reported an operating income (earnings before taxes and interest) of $78,700,000! A few months later (March 2011), Sulake announced that they had achieved €1.6 million net profit - €1 million more than the previous year. Here is a list of Sulake's revenue over the years:

Sulake has managed to attain over 43 awards since it was first founded, with the most recent award being achieved in May 2010. Here is a list of all the international awards they have received:

Here is a list of all the Finnish awards they have received: