The Valentine's Vault was a HabboxLive event which was run during Valentine's 2012 at Habbox. The event ran for three nights (17th, 18th and 19th) and was organised by DJ Woodseh, DJ Logan and DJ Rain. It was confirmed on the 10th March 2012 during a pre-Vault giveaway that The Vault would be returning on Saturday the 7th April as a monthly show. The vault no longer runs due to two of the original DJs no longer being in the HabboxLive Department.

The Valentines' Vault was a game consisting of 3 levels, which gave players the chance of winning up to 50 Credits. It involved a quick first round, code cracking mini-game and the big finale where one lucky person could win the biggest prize. 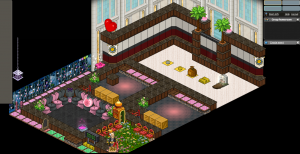 Once the game started, 10 people were let into the gaming area and the DJ said a code-word on air. The code was the ticket to possibly getting into The Vault so it was very important that players tuned in. Once the DJ had revealed the code-word on air, a counter would start to countdown from 30 seconds. Once the countdown was complete and hit 00:00, the first two people to say the code-word would be teleported into the next stage of the game: the mini-game.

The Mini-Game consisted of 5 Color Tiles and 3 Puzzle Boxes. The objective was to successfully crack the code by getting the 3 Puzzle Boxes on the correct tile, but there was a twist: only two of the DJs knew which tiles were the correct ones. This means that players had to guess the order to crack the code. In order to check if the code was correct, players had to flick the switch in the game. If the code was correct then the gates to the heart of The Vault would open. If the code was wrong then the Puzzle Boxes would fly back to their original position, allowing players to try again. The first person to crack the code entered the heart of The Vault where they could win up to 50 Credits.

The Vault was the final game players had to complete before they could win any prizes. They would first be offered a piece of furniture that they could keep or risk. It was all about luck and greed. If a player decided to keep the item, they would be given that item and the game would be over. However, if they decided to risk then the piece of furniture would be picked up and a switch would appear. When the switch was flicked, various prizes including 5, 10, 20, 50 Credits and a Grave flew across the room before returning to their original positions. One of the prizes would appear next to the player, resulting in the player winning that prize. If the Grave landed next to them, it would be classified as no prize.

The prizes that were up for grabs during The Valentine's Vault were the following: