The Yohand Comeere easel was the third of the Limited Edition Easels to be released on Habbo and it was also one of the rarest and most expensive Limited Edition Rares to be available for players to buy, alongside the Pink Dragon Lamp.

It was released on the 23rd February 2013 at a price of 750 Credits, there were 80 available and all sold out within a matter of minutes and they're still available via trading at a profit of their original selling price.

The easel has the motto of 'Habbo with a ducket earring' and they were renamed from the original pieces to avoid copyright, there were also badges and a campaign with the easels to give Habbos a chance to gain something if they couldn't afford the easel.

Since it's release in 2013, many of the Yohand Comeere easel have gone inactive or NFS in the hands of the collectors. Given the coveted "Easel Set" becoming scarcer and more demanded, this easel plays a key piece for the overall set that becomes harder to obtain given the years that have passed making these scarcer to find for sale, similar to that of the Pink Dragon Lamp quantity of 80 that remain in the game actively.

The painting on the easel is based on a real life painting named: The girl with the pearl earring by Johannes Vermeer. Painted in the year 1667. 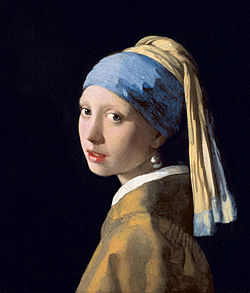