A selection of edited Gold bars and Gold coins.

Credits, also known as "Coins" are Habbo Hotel's official currency. Credits can be acquired by purchasing them from Habbo directly using real-life money or by trading them in the game itself through Credit Furni. Credits can be spent in the Shop or traded for other items.

Since 2012 a new type of currency alongside the Credits were introduced called Diamonds. You get the same amount of Diamonds as the Credits you buy, and they allow a user to buy more exclusive types of furniture, memberships, and clothing.

Up until the Habbo merge in 2010, users on national Habbo Hotels could call from a home phone to order credits over-the-phone, but only from a wired domestic landline within an area calling code from the country the hotel was hosted in. This was available for all English speaking hotels and was more common a practice before mobiles were so widespread.

On Habbo UK, Habbo's could order either 20 credits for £1 by calling 09056 575 575, or 45 credits for £2 by calling 0906 900 9100. Many younger players abused this system as phone charges were only later traceable by the bill payer when the monthly phone bill arrived, and so was a frequent method of scamming. To avoid Habbo's spending too much money via this payment method, Sulake restricted calls to 3 times a day, 3 times a week. 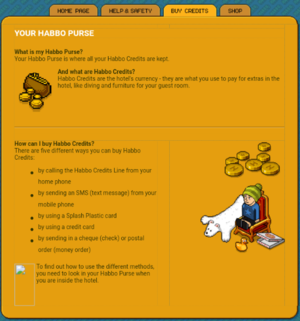 When calling to order 20 credits a woman's voice (likely an early staff member) could be heard automatically instructing:

Welcome to the Habbo Hotel credits line, this call will cost one pound. You must have permission from the bill payer to call this line. Please enter your credits code from your Habbo purse.

The user would enter their Habbo's Credit Code, with each key making an audible sound on the keypad in separate tones for each number, she would then say:

The user pressed 1 or had to end the call if the code was wrong to start again.

[Chu-ching sound] Thanks. Your credits have been added to your Habbo purse, you can now hang up the line.

In around 2009, the woman's voice was replaced by 'Bob', a male voice fashioned after a character ubiquitous at the time in hotel competitions and articles.

The Credits Code was a unique number given to every registered Habbo on national hotels before the international merge. As this number was assigned chronologically, you could roughly calculate how old a Habbo was by their credit code. For example, the Habbo HOSKO02 registered on July 7th 2003 had the credit code 05571463, meaning he was the 557163rd registered Habbo. Pre-merge, you could use this same Habbo ID to search the homepage of any given Habbo, i.e. habbo.com/home/05571463. As you might expect, the very first registered on Habbo had the Habbo ID '1' (which was the user 'aapo' on Habbo UK).

Credits, as well as Habbo Club, Builders Club and a Combo deal with all three can be bought from the Shop section of the Habbo homepage using a variety of different methods. The prices are different in different countries and currencies.

If you're from a different country not listed here, or wish to buy in a different currency (for example if the exchange rates favour one currency over another and can save the customer money) you can still buy credits via Paypal, Credit Card or Paysafe Card by choosing a different Country location on the shop page. For example if you are from The Netherlands and still want to buy Credits on Habbo.com you can select Ireland to buy in Euros. This will not work for all methods as some purchases are only available using mobile, and the area code must match the country selected. There may be a fee from your bank for converting a currency that is foreign to you.

There are many different payment methods available with availability and cost varying between locations.

You can buy Habbo Credits using your phone via SMS. To buy Credits via SMS, you have to enter your mobile phone number provided on the screen. After your message is sent you will receive another message with your voucher code; You will be asked to confirm the transaction via text message.

You can buy Habbo Credits with a Paysafe card. You can do this via an App or buying it as a receipt with a code on it.

All you have to do is make an account and download the app, go to Epin and buy a code. Enter the code you have in the Pay screen.

You can buy Habbo Credits with a PCGamesSupply voucher. These are redeemable on any hotel using the purchased code.

You were also be able to buy Habbo Credits from your local EB Games store. These are called pre-paid cards, and they are a collectable item. They came in 50c, 100c and 250c. Once you have found your local EB Games store and bought a Habbo prepaid card, scratch the back sticker of the card to reveal the voucher code. This has now been improved and expanded, and they aren't just secluded to an EB store. They were available at Game, WHSmith and Tesco and entitled you to 80 Credits for £10. However, after the Channel 4 Investigation in 2012 many of the large companies, such as Tesco and Game stopped selling these.

The cost of buying Credits or subscriptions from the shop varies depending on location.

Credit Furni, also known as Habbo Exchange, is the method used to transform your Credits into a tradeable currency. The Bronze Coin, Silver Coin, Gold Coin, Sack of Coins and Gold Bar can be purchased the whole year around, but sometimes Habbo releases temporary currency options as well.

Every so often Habbo will come up will release a Double Credits promotion. During this promotion, Habbo put out an offer whereby a certain number of Credits can be purchased for half of their usual cost. The double Credits promotion usually comes out twice a year, and since the introduction of Diamonds these have also been doubled during the promotion, making it a particularly enticing prospect. 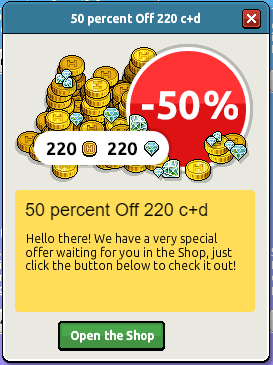 A 50% off offer exclusive to a Habbo in-game

In between these times Habbo may offer exclusive reduction offers direct to Habbos themselves via a notice in-client. It is presumed that these offers are tailroed to the spending habits of a particular Habbo, with bigger spenders being given offers for a greater number of credits at 50%. These appear more randomly than the Habbo-wide Double Credit offers detailed below.

Below is a breakdown of when the Double Credits promotion were announced on Habbo's official Twitter account, which gives some indication as to when the promotion may be expected to pop up again in future years. Although one or two data points are missing (with most years having two double credits promotions reliably), the below trends suggest a likelihood of Double Credits in late March/early April for the first promotion of any given year, and late July to early September for the second promotion. Since the summer of 2020, Double Credit offers increased enormously in frequency, often arriving unannounced as purchase options multiple times within the same month. For this reason, the table below has not been added to or tracked since then.

In 2012 Sulake added a way for users to get Credits by completing small tasks, which quickly became a very popular method of getting essentially free Credits. Especially popular was the in-client advertising video, which gave the user one Bronze Coin for every completed watch. This was easily exploited as many users watched the videos repeatedly on clone accounts and collected large amounts of free Credits. Credit rewards for this was subsequently removed in early 2013 and replaced with 'Watch & Earn', for which users would receive junk furniture. After this feature was removed, the Earning Credits options were reduced to survey tracks, mobile app rewards (often for downloading a game and reaching a certain level), or registering for various advertising outlets.

Due to the fact that each transaction cost an additional 1c with no regard to the overall cost, it was therefore far more economical to buy larger amounts if possible - for example, 50c as a Gold Bar would originally set you back 51c whereas 50 individual purchases of Bronze Coins would originally have ended up costing 100c in total. To combat this, and to allow for the wider use of Bronze Coins for event prizes and small trades, it was later made possible to buy bundles of smaller currency while keeping just 1c as the "tax", for example paying 51c for 50 Bronze Coins or 21c for 4 Silver Coins.

Near the end of October 2020, all regular Credit Furni were given a uniform 10% tax (rounded up). This applied to singular items such as a Gold Bar as well as the 50x Bronze Coin bundle, both of which were changed to cost 55c.

On 4th April 2011 the Platinum Bar was released which was worth 500 Credits, and did not carry the usual tax. With this in mind, if one had the means to purchase these they would always represent at least an even investment, as it would never be worth less than what was paid in the catalogue. Since then, a large number of such items have been released for short periods of time which can be seen on the Credit Furni page. These temporary Credit Furni are not taxed, and as such represented an entirely safe (if not particularly lucrative) investment until the Vault feature was introduced.

There are 2 '''discontinued''' secret Credit badges a Habbo can earn for buying Credits, note that these 40 Credits and 220 Credits need to be purchased in one time for the badge to be awarded. This lasted for a short time in 2013 and is not available anymore.