This page is for the Achievements from before the Unity Client and should not be taken as current information. For the new achievements please see the new page: New Achievements

Achievements are goals which Habbo set for every player to complete and can be found when clicking on your Habbo's head ("Me") in the row of icons in the bottom left of the screen. Achievements cover a wide range of activities; including collecting furniture, giving out respects, owning and taking care of Pets or even playing the Habbo mini-games such as Battle Banzai and Freeze. Achievements come with a variety of rewards, including badges and points which are added to each player's profile, with the points being added to his or her Achievement score. Some achievements can take a while to complete, even up to a matter of months, whereas some take minutes. Quick ways to gain the achievement badges is to go in Boosting Rooms as they offer a variety of ingenious ways to give badges! Achievements can be earned easily and Tricks and bugs have occurred within them, some of the bugs include the Habbo Helper badge glitch! 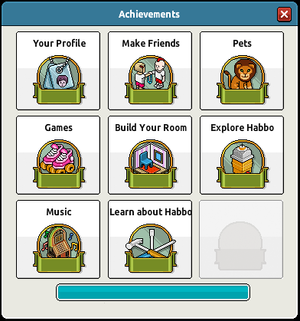 An example of the categories

There are eight (nine if you count the Talent Track achievements) separate categories to make the achievements more accessible. Within each category, there is a list of badges that can be won, complete with descriptions and instructions on how to gain them. Some achievements will also have a bar underneath to keep track of the progress (suitable for badges with many levels). At the bottom of the list of categories, there is a bar similar to the progress bar; but is a sum of all the completed achievements so far.

Note that the Habbo Helpers achievements are not found in the Achievement section, but in the Talents section.

There is a broad range of achievements to be completed, and are divided into the following sections;

Badges are given for every completed achievement as well, most of which compromise of an image with different Roman Numerals underneath, corresponding to the total level each Habbo has achieved. Most of the badges have either 10 (X) or 20 (XX) levels. These badges are not popularly worn around the Hotel, as they are ubiquitous (especially the lower value ones).