The Comedy Poster is a Super Rare on Habbo. This poster is a reference to the Noble and Silver show, held at the Edinburgh Festival 2001. Performances in satirical and post-modern comedy by Kim Noble and Stuart Silver, it was a popular and well reviewed show. The poster was released to coincide with the Noble and Silver campaign that was held in the original Theatredrome, which subsequently featured an added Applause banner with moving curtains on stage. Not much is known about the campaign or why the poster was given out and appeared in the hotel.[1] 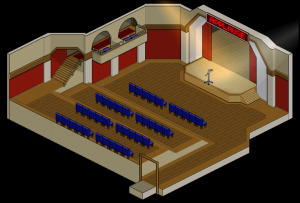 The name and description was 'Comedy Poster' and 'The Noble and Silver Show' respectively. [2]

Its exact origins are unknown, although it is believed to have began circulating on Habbo.co.uk in 2001. Staff attempted to remove this item some time after its release, but instead of removing it completely, they only deleted the image and moved the Comedy Poster from poster ID 1 to ID 1000. They replaced poster_1_name with the Ancestress poster.

There isn't a notable value for this inactive item at this given time.

Note: A user is considered inactive if they have not logged in for over a week.