Four new rares were released to celebrate Valentines, two of these were clothing items.

The Valentine's Deal was made available during February of 2020, there were two different deals available. Which deal that was offered to each player was dependent on their individual spending habits.

Every player who purchased one of the deals received at least one of the Chef Overalls clothing item, this was exclusive to the deal.

Each user who purchased the deals also received a badge.

According to Habbowidgets, 421 users have this badge.

A new room bundle was released during this campaign.

Three previous bundles were re-released throughout the month.

All furniture in the Chocolatier Shop Bundle was exclusive to the bundle.

Every user who purchased the Valentines Gift Offer will also receive a badge. 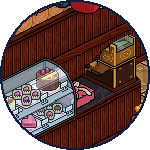 Valentine's Day is here and the new restaurant in town is not ready for it... Help their staff get everything prepared and maybe at the end of the evening they'll help you deliver on a surprise you won't forget!

It's time to get all the delicious meals ready! Help the chefs get all the ingredients they need.

A Night to Remember

End the evening with a romantic proposal, if you're lucky enough maybe she'll say yes...

The competition was won by user sam_lay123 - who recreated the "Winner Takes It All!" scene from Mamma Mia