The A.P. Plumage was the final of the five easels to be released in the series. It was released on February 24th 2013 and was one of the cheaper easels, costing users 250 Credits. Altogether there were 240 of them released, the same amount as the Carl Waddlesworth III easel.

Also similarly to the Carl Waddlesworth III easel, the A.P. Plumage easel features ducks, but this time they appear to be playing poker as the easel has the motto of Ducks playing poker. With the amount available partnered with the cost it didn't do very well selling in the Catalogue.For some reason, it didn't include 'easel' in its name like the previous four did.

The painting on the easel is based on a real life painting called: Dogs Playing Poker by: Classius Marcellus Coolidge. Painted in the year 1903 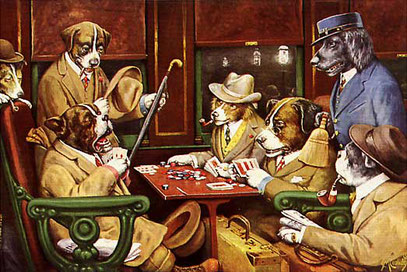